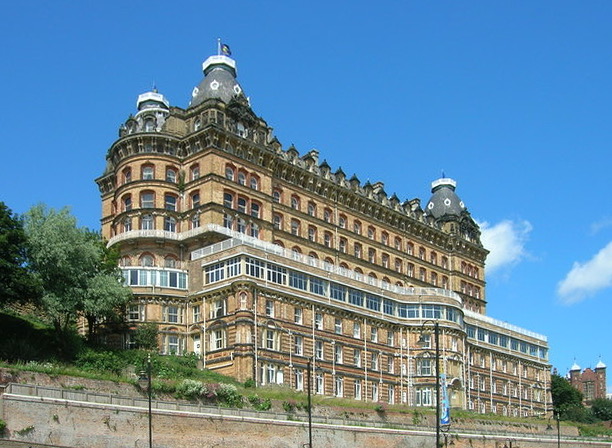 01 Dec The Grandest of Grand Hotels!

Posted at 15:03h in Uncategorized by Sarah Milne-Day
0 Likes

Scarborough’s hotel and its links to time, Queen Victoria, the SAS and Adolf Hitler

On this day, December 1st, the architect Cuthbert Brodrick was born in Hull.  Although he is probably most famous for designing Leeds Town Hall, he was also the architect of a fascinating building – the Grand Hotel in Scarborough.  This magnificent building has a wealth of stories and histories hiding in its walls.

Scarborough grew as a seaside resort with the discovery of natural mineral waters in the 1700s but it was the arrival of the railways in 1845 that really caused the town to boom.

Some local businessmen saw the potential for a brand new, state of the art hotel right in the centre of the town, in the early 1860s and work began in 1863.  Despite delays due to funding issues the hotel opened on July 24th 1867, having finally cost around £100,000 (equivalent to around £11.5million today).

When it opened it was the largest purpose-built hotel in Europe and the largest brick structure in Europe.  Over 6 million bricks were used to construct it, but there’s much more to the building than its size……

It was built in the shape of a V to celebrate the reigning monarch, Queen Victoria.  It was also build with the theme of time, so it has 4 towers to represent the four seasons of the year, 12 floors for the months of the year, 52 chimneys for the weeks of the year and 365 bedrooms for the days in the year!

No expense was spared on the fixtures and fittings making it one of the most luxurious hotel in the world and it had over 30 public lounges.  A journalist attending the opening said “The formal opening was marked by a magnificence and brilliance quite in harmony with so palatial a structure – a grand full dress ball, when an assembly of youth, beauty and fashion were witnessed which augers well for the future of this princely undertaking.  It may be said, without an exaggeration, that if not the best it is one of the most splendid in Europe.”  That’s quite a review!

Its other unique selling point was the presence of extra taps in the bathrooms that meant guests could bathe in salt water if they wanted to!

During World War I the hotel suffered from a German bomb attack.  On December 16th 1914 the hotel was hit by approximately 30 artillery shells and the restaurant was destroyed.  The hotel struggled for a while following this but was repaired and continued to welcome guests that included the future King Edward VIII and the first ever Labour Prime Minster, Ramsay MacDonald.

During World War II, it was used as a base for the Royal Air Force and had anti-aircraft guns mounted on each of the 4 turrets so it could be defended to prevent an attack like the bombing in the First World War.   However, the airmen stationed at the hotel were surprised, during a fearsome Luftwaffe attack in March 1941, that it wasn’t hit.  1400 buildings in Scarborough were destroyed and 28 people were killed.  Historian Mike Covell believes this is because Adolf Hitler had earmarked the hotel for his British headquarters because of its luxurious style and reputation.  Thankfully he never got to see this happen but wartime Prime Minster Winston Churchill did visit later during a Conservative Party Conference.

In 1980 the hotel served as a base for SAS agents when the Iranian Embassy in London was under siege.  The hotel was used for covert training meant to prepare the agents for further terrorist threats.

These days the hotel is still a busy and popular hotel and a Grade I listed building.   It may not be quite as luxurious as it once was but it’s certainly still got some stories to tell!